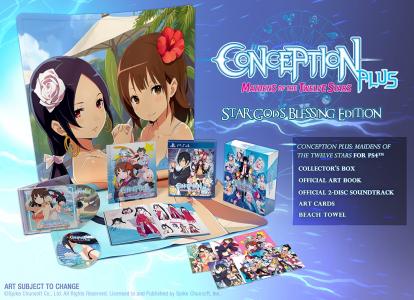 Itsuki Yuge is summoned to the magical world of Granvania to save it from evil Impurities. As the saviour from another world known as “God’s Gift,” Itsuki and his Star Children, born between him and the 12 Star Maidens, are the only ones capable of banishing these Impurities. To return home, he must save Granvania with his Star Children! This Star God's Blessing Edition Includes: Conception PLUS: Maidens of the Twelve Stars for PS4® Collector's Box Official Art Book Official 2-Disc Soundtrack Art Cards Beach Towel