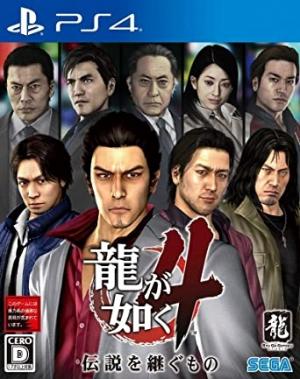 Yakuza 4 (Japanese: 龍が如く4 伝説を継ぐもの, Hepburn: Ryū ga Gotoku 4: Densetsu wo Tsugumono, "Like a Dragon 4: Successor of the Legend") is a video game developed and released by Sega for the PlayStation 3.[1] The game was introduced on July 24, 2009.[2] A promotional video was presented at the 2009 Tokyo Game Show,[3] The sequel to Yakuza 3, it was released on March 18, 2010, in Japan after a playable demo was released on the Japanese PlayStation Store on March 5.[4] Yakuza 4 was released in Europe and North America in March 2011.[5][6] This was the first Yakuza game that did not feature the involvement of the current series producer and one of the members involved since the very first game, Daisuke Sato. A sequel, Yakuza 5 was released in 2012. A remaster was released on the PlayStation 4 on January 17, 2019 in Japan, and worldwide on October 29, 2019 as part of The Yakuza Remastered Collection.[7] Versions for Microsoft Windows and Xbox One were released in January 2021.[8][9] Because Hiroki Narimiya retired from acting due to allegations of drug use, the role of Tanimura was recast with Toshiki Masuda taking over.[7]