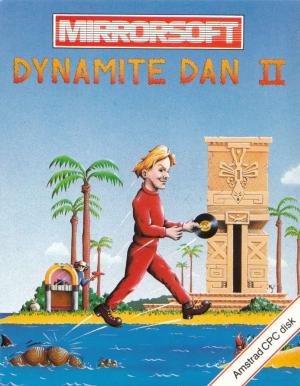 Implanting subliminal messages in music seemingly worked for Judas Priest - the evil Dr. Blitzen is trying to make it work for himself, by planting messages in popular records. Blitzen has used the 8 islands of Arcanium for this task - each contains a jukebox as well as a record containing a clue to the location of the secret factory in which he produces these horrors. Dynamite Dan is back to put a stop to this, by exploring the 8 islands in turn to find the pieces of the puzzle. There are 192 screens in total - 24 on each island - all loaded with enemies on fixed attack patterns. Some move diagonally, others home in on Dan, and some move horizontally - all of them detract from Dan's energy level, eventually leading to death and failure, and some can steal objects from him. The record and jukebox are randomly placed on each go, as are the enemies. Dan can jump far, and his jumps are bigger if he has taken a run-up. There are many objects to collect - a torch for theft protection, bomb goggles to blow doors open, foods for restored energy (and a mixer for infinite energy), and dumbells to increase jump size. All of these are used automatically. To escape each island he must also find enough fuel for his trusty Zeppelin.