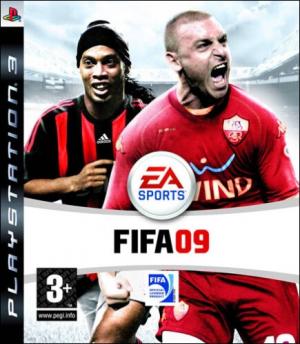 Experience the most authentic football simulation EA SPORTS has delivered as you live the fantasy of playing as a professional footballer and customise the game to suit your style and ability. Powered by the third generation of the EA SPORTS football engine, FIFA 09 features more than 250 core gameplay additions and enhancements that deliver the most responsive, intelligent and realistic action ever for the series. With new player momentum physics the speed and weight of the player determines everything from the distance of a slide tackle and the power of a header to the severity of player collisions and the height of a player’s jump. Plus, players now behave according to their physical attributes with larger, stronger players dominating collisions, battles for control of the ball, and position in challenges for two player headers. FIFA 09 features new Custom Team Tactics that gives you all the tools to become a first-team coach. For the first time, go inside the game engine to customise the positioning and support play of your teammates and decide exactly how your team will play in any situation. Save your tactics and then make strategic decisions to exploit your opponent’s weaknesses, all on-the-fly. Now there is nothing stopping you from living your dream and proving yourself as a professional player through the popular feature innovation – Be A Pro – now expanded to include a career mode and the ability to play with a team of up to 10 friends all playing fixed outfield positions. In Be A Pro: Seasons you pick or create a professional player and then develop his skills at a single outfield position with the ultimate goal of becoming a national legend. In Be A Pro: 10 vs 10 Online Team Play FIFA 09 will change the way sports games are played online by becoming the first sports franchise to enable up to 20 individuals playing fixed positions to play a single game at the same time. Instead of thinking as an individual player now you have to think and play as a team. FIFA 09 delivers a new level of authenticity. The matchday experience is now true-to-life with a referee and assistants. Plus, crowds, stadium atmosphere, and commentary have all been regionalised in exacting detail and 15 new stadiums added. Featuring 250 additions and enhancements including new animation technology and new player momentum physics Become a first-team coach with the power to tune and balance 11 tactical sliders for 140 attacking and 40 defending options (more than 50,000 combinations) Create your own team of up to 10 friends all playing fixed outfield positions to challenge rival teams of up to 10 players Visit FIFA.com/FIWC to sign up for the FIFA Interactive World Cup and win great prizes with FIFA 09 and PlayStation 3