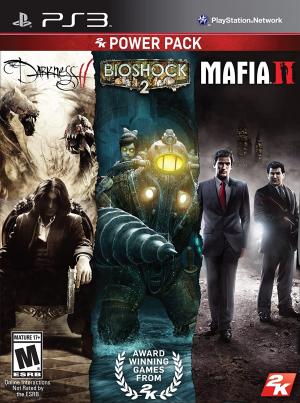 Experience the intensity of these three action-packed 2K Games sequels all over again with the Power Pack Collection. The Darkness II, BioShock 2, and Mafia II all in one package makes for a carnage-filled, blood-fueled experience that'll get your adrenaline flowing and your heart pumping. Take aim at three 2K Games classics. In The Darkness II, you are thrust into a noir world with graphic novel-style shading and color. It's been two years since Jackie Estacado used The Darkness to kill the men responsible for his girlfriend's murder, but now an attempt on Jackie's life has triggered an all-out mob war. In BioShock 2, the power dynamic in Rapture has shifted, and you must bear witness as Sofia Lamb's evil regime turns the once-promising underwater city into a crumbling empire. On the streets of Empire City, you're Vito Scaletta, a made man in Mafia II, earning your spot in the Clemente crime family by force. As Vito works his way up the ladder, he quickly finds that things aren't always as they appear.