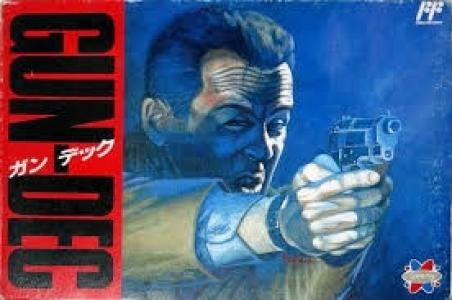 This is the Japanese version of Vice: Project Doom (NES) released on the Famicom Gun-Dec is a game that features side-scrolling platform sequences, overhead driving modes and rail-shooter stages. In driving stages Hart's vehicle can accelerate or slow down and fire his weapon straight ahead. During side-scrolling sequences, Hart can jump, duck, climb or use his selected weapon. Weapons that can be selected include a Katana sword, a pistol and a grenade-type weapon. These weapons feature limited ammunition with the exception of the katana. Power-ups include ammunition, coins, and health. In rail-shooting stages, similar to Operation Wolf, Hart can shoot enemies with his gun or throw grenades and pick up items by shooting at them.