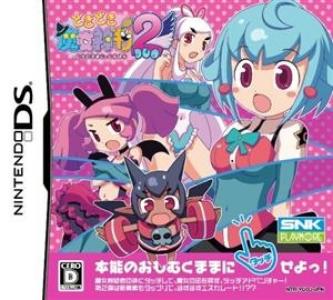 Doki Doki Majo Shinpan 2 Duo (どきどき魔女神判2, lit. "Thump-Thump Witch Judgement 2", or more accurately translated as "Heart-Pounding Magical Investigation 2") is the sequel to the Japan-exclusive Doki Doki Majo Shinpan!. A third game titled Doki Majo Plus was released on July 30, 2009. Similarly to the first game, players determine whether female characters are witches by touching their bodies with the stylus. However, unlike its predecessor, this title exhibits new features such as an enhanced witch-check touching system and microphone input. The game resumes with Akuji, the main character of the first game, this time in high school. The game is rated D (17 years and over) in Japan by the CERO because of the nudity and sexual references presented in the game.