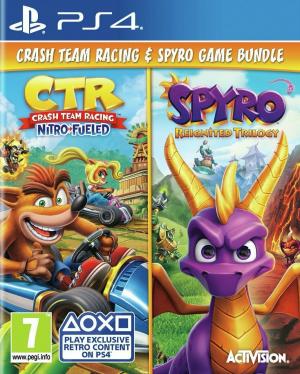 This Game Bundle includes: Crash Team Racing Nitro-Fueled Spyro Reignited Trilogy (No download required. This is the 2019 reissue. All games are on disc and comes with patch 1.03) Spyro™ the Dragon Spyro™ 2: Ripto's Rage! Spyro™: Year of the Dragon Crash is back in the driver's seat! Get ready to go fur-throttle with Crash™ Team Racing Nitro-Fueled. It's the authentic CTR experience plus a whole lot more, now fully-remastered and revved up to the max: Features: Start your engines with the original game modes, characters, tracks, power-ups, weapons and controls Power slide to glory in additional karts, tracks and arenas from Crash™ Nitro Kart Race online with friends and Crash the competition with online leaderboards Customize your ride and swag out your racer with n. sane kart items and skins Keep the race going with new content and challenges in Grand Prix post-launch seasons With Crash™ Team Racing Nitro-Fueled, the stakes are high and the competition is fierce. It's the CTR you love, now kicked into the highest gear. Spyro is back and he is all scaled up! Spyro™ is back and bringing the heat in the Spyro™ Reignited Trilogy game collection. Now fans can rekindle the fire with the beloved video game icon like never before with remastered versions of the original three games that ignited a phenomenon, Spyro™ the Dragon, Spyro™ 2: Ripto's Rage! and Spyro™ Year of the Dragon. Featuring the same sick burns, same smouldering attitude and now all scaled up in stunning HD, players can enjoy this classic platformer that's loaded with an incredible amount of new detail and improved graphics in a new way. Also, Stewart Copeland (The Police), the original composer of the Spyro franchise soundtrack, brought new music for fans of the Spyro Reignited Trilogy last year! The new track, "Tiger Train", reprises recognisable music motifs from the first three games into a memorable, orchestral-rock journey through Stewart's favourite themes from the original tunes that both existing and new players alike will enjoy. Trilogy Features: Unleash the Dragon - The purple dragon that stole gamers' hearts 20 years ago is back and looking more fly than ever in scaled-up HD graphics. This is the Spyro with swagger and personality that fans remember from their childhood. Dynamic Collection - The Spyro Reignited Trilogy lets players glide to new heights, unleash fire-breathing attacks, and explore lush environments filled with new detail bringing the Dragon and Avalar realms to life in more than 100 levels from the first three games. Each level in Spyro Reignited Trilogy is mapped in the spirit of the originals, now re-imagined with modern mechanics to give fans an excellent gaming experience. Gnostalgia n' More - Explore the expansive realms, re-encounter the fiery personalities and relive the adventure in fully remastered glory. Returned and remastered Orb Challenges, mini-games and more make this an epic trilogy for the diehard Spyro-maniacs! So Fly - The game collection is stunning, lush, and fiery! The Spyro Reignited Trilogy introduces players to a completely remastered game collection with a re-imagined cast of characters, brand-new lighting, animations, environments, and recreated cinematics - all in stunning HD. Fresh Controls, Original Adventure - The trilogy breaks free from the gameplay chains of the '90s with updated controls, silky-smooth game camera handling, and full analog stick support for added flavour in this one-of-a-kind adventure. Did You Hear That? - Fans of the Spyro games may recognise some familiar sounds in Spyro Reignited Trilogy. Tom Kenny, the voice actor in Spyro 2: Ripto's Rage!, and Spyro: Year of the Dragon and fan-favourite reprises his role as the voice of Spyro. The new collection also remasters Stewart Copeland's original soundtrack from the first three games, but also includes an all-new track from Copeland, entitled "Tiger Train". Spyro Reignited Trilogy introduces an option that will allow fans to switch between the original and remastered music from the in-game menu.