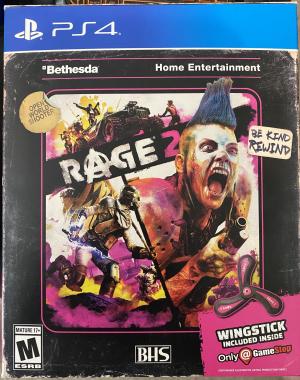 Rage 2 (stylized as RAGE 2) is a post-apocalyptic open world first-person shooter developed by Avalanche Studios with (creative) oversight of Id Software. It was announced by Bethesda Softworks on May 14, 2018 as a sequel to the sci-fi first-person shooter racing game RAGE, released in October 2011. RAGE 2 is available on PC, PlayStation 4 and Xbox One and released on May 14, 2019. On June 6th, 2019, Google announced RAGE 2 is available via the cloud Gaming through Stadia. It was announced on May 15, 2018 that the game's pre-order bonuses include a unique mission called "Cult of the Death God", the "Settlers Pistol" from the original RAGE, the Nicholas Raine Armor, and a Monster Truck skin for use within the game.