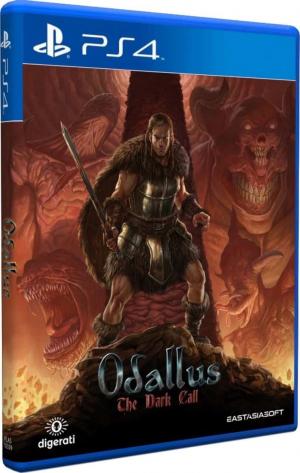 An army of demons burn Haggis's village and take his son; Haggis goes into action to defeat them. It appears that a mysterious cult has kidnapped his son for plans of a dark sacrifice. Haggis battles his way from the village to a castle on top of a nearby mountain; twice battling two demonic generals on the way, killing one and forcing the other - a woman - to retreat. Along the way he collects mysterious shards that ultimately form the Odallus orb. At the castle's throne room, their leader reveals himself to be Haggis' son, somehow aged to adulthood and claiming to have lived a thousand years. He offers to share the power of the Odallus with his father and rule jointly as the new gods of the world, but Haggis refuses and slays his son. Immediately regretful, he is soon filled with the power of the Odallus, and refuses to rule the world; deciding, instead, that the world has no more need of gods. He summons a pillar of energy that destroys the castle - and presumably himself - as the female general looks on from the distance. After the credits, Haggis awakens in a strange land, where an ominous glowing eye forms in the clouds, and a voice encourages him to craft a new world from the darkness inside of him.