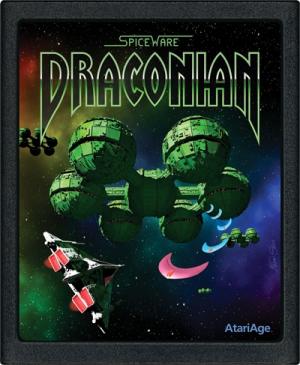 BLAST OFF! As pilot of the Space Fighter Draconian, your mission is to destroy enemy space stations – sector by sector – until they’re all wiped out! ALERT! ALERT! Your task won’t be easy - the enemy stations will relentlessly attack you with aggressive missiles and a barrage of defensive fire. BATTLE STATIONS! Formations of missiles will gang up and hunt you down. But if you take out the lead missile, the others will scatter! SPY SHIP SIGHTED! If you see one of the enemy’s Spy Ships you need to destroy it immediately! If it escapes, it will report your position, and then... CONDITION RED!! The enemy will throw everything it has at you. Can you survive long enough to move onto the next sector? Good luck! The galaxy is counting on you! Draconian has all of the excitement you’d find in a classic arcade game! Featuring digitized voices, a radar scanner, enemy formation display, over 48 unique sectors, and much, much more! Draconian was written by Darrell Spice, Jr., whose previous Atari 2600 titles include Medieval Mayhem, Stay Frosty, Stay Frosty 2, and Space Rocks.