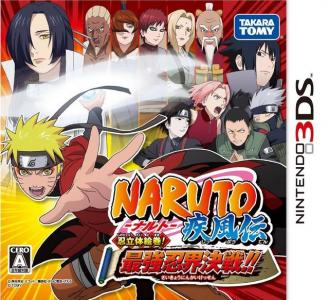 Naruto Shippuden 3D: The New Era will provide high-kicking action in glorious, portable 3D in an all new story setting. In this latest videogame action adventure in the long running and celebrated series, Naruto is presented for the very first time in 3D, with dynamic camera twists and turns taking full advantage of the new Nintendo handheld's hardware capabilities. Naruto is available from the outset as a selectable character, with rival Sasuke un-lockable during the course of gameplay. A supporting cast of ten 'assist' characters, three of which can be taken along per chapter, offers a different dynamic to gameplay, allowing for a more strategic approach to combat. Naruto fans will be able to engage in a bespoke storyline based on the last events of the manga and animation series, featuring an all new female ninja character, Malice. The mysterious Five Kages, will also make their first videogame appearance in an adventure which spans nine different locations, with secret items and stages aplenty to be unlocked along the way. Naruto Shippuden 3D: The New Era on 3DS also incorporates the lead character's 'Sage Mode', in which Naruto transforms into a significantly more powerful version of himself once his special gauge is charged to maximum. The game will make use of the 3DS' motion controls, in situations such as avoiding certain attacks and during boss fights.