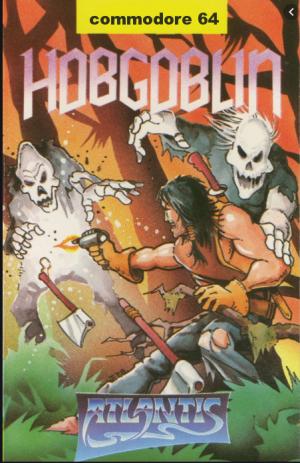 Zanock, the only son of the king of Altoris, must cross the swamps of the hobgoblins to bring back the stolen Golden Orb, which has thus far kept the kingdom of Altoris safe. Hobgoblin is the BBC/Electron equivalent of Ghosts 'N Goblins. Just like the original, you play a thinly-clad man jumping around in a spooky landscape filled with monsters. And just like the original, the game is known for its high difficulty level. Killing monsters by throwing daggers at them results in bonus money or upgrades, such as hatchets, more powerful daggers, longer range or extra lives. Technically, the game doesn't scroll on any platform, instead sticking to a flip-screen technique, which will lead to many leaps of faith and difficulties in timing jumps. [edit description | view history]