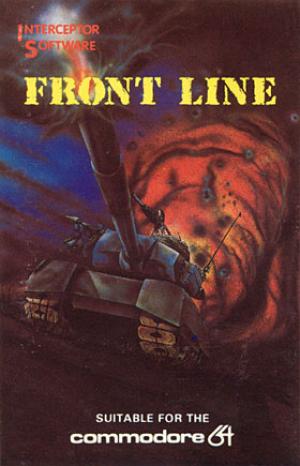 The Edward Isles in 1944 during World War II housed various supply dumps but unfortunately the enemy have taken over the islands important to the war effort. With no planes or tanks able to move around the island, a new development, the Death Tank Interceptor has been chosen along with yourself to drive around the island collecting as many supply dumps as you can. Front Line is a top view multi-directional scrolling game where you drive the tank to collect the dumps while shelling or avoiding the various vehicles and obstacles like trees, buildings and rivers. The vehicles you will encounter are tanks, planes and helicopters and your other obstacles are gun placements and mines. To fire a shell from your tank, you hold the fire button down and release it to make it explode and you are equipped with 20. If you are hit by any weapons or you run over a mine then you lose part of your armour shown by a gauge. Collecting a supply dump though increases your armour and you have 20 shells once again.