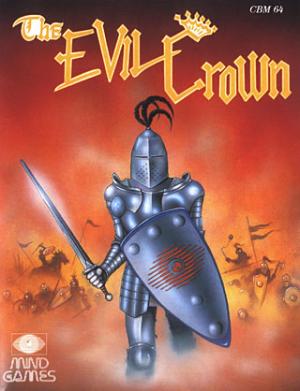 Evil Crown is a strategy game which allows you to run a Barony in feudal medieval England. The game starts in 1156 AD and your estate has to be run in yearly turns. The screen is split into two halves. The left side is a map showing a small part of your land. This all allows you to see your harvests and what areas to expand into. The right side are icons which include allowing you to alter the tax rate, toll rate, pay scutage to the King and modify your army. There is also a arcade sequence where you can compete in a jousting tournament. Here the joystick is used to raise or lower your lance as you approach your opponent. Whatever the result you are then shown a battle or peasant revolt. A simplified graphic sequence shows the outcomes. After all this you are shown your harvest results. If all is well then it's on to the next yearly cycle. The joystick is used to move your cursor around the screen.