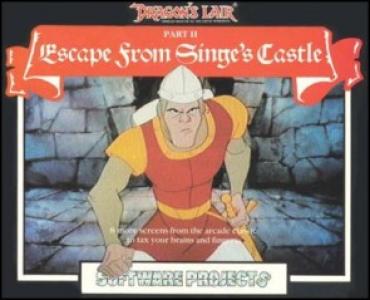 Following the first adaptation of the laserdisc-based arcade classic Dragon's Lair, Software Projects followed it up with Escape from Singe's Castle, again loosely adapting scenes from the original game for the capabilities of contemporary 8-bit machines. After defeating the dragon Singe and rescuing Princess Daphne, Dirk the Daring still yearns for adventure. He ventures into the domain of the Lizard King, where according to legend a large pot of gold awaits bold adventurers. The player controls Dirk through eight distinct scenes: Ye River Caves: Dirk must go down a wild river in his boat, avoiding rocks by steering in the direction indicated by arrows as well as avoiding deadly whirlpools. Boulder Alley: Channeling Indiana Jones, Dirk must escape a giant boulder rolling towards him, leaping over holes in the ground and avoiding other obstacles in the way. Throne Room: Deadly magical traps await in the Lizard King's throne room. Dirk can only survive by using the correct sequence of sidesteps and sword slashes. Dungeons of the Lizard King: Dirk is very close to his goal, but the Lizard King has laid a trap: he stole Dirk's sword, put it near the pot of gold, and now is close on the hero's tail. Dirk must navigate a maze of rooms to find the sword, avoiding the Lizard King who is in hot pursuit. Once found, the sword must be used to strike down the King. Magical Flying Horse: Riding on a flying horse, Dirk must evade rocks of ice (which sap his strength) and solid walls (which end his journey instantly when hit). Doom Dungeon: Traps and evil creatures abound in a dungeon room. Again, only the correct sequence of attacks and steps will allow Dirk to survive. Mystic Mosaic: Dirk must cross a room to get to one of two possible exits (only one of which leads to safety), but there's a catch: the floor consists of a magical mosaic, which constantly changes shape in a repeating pattern. Standing in the wrong place at the wrong time means certain death. A giant bat that inhabits the mosaic room can be vanquished with a sword blow. Mud Monsters: The key to final escape is a magic bottle, a long way from the place where Dirk starts this scene. He must find a way across a gap in the canyon and jump across a huge mud-spewing geyser, all while avoiding the mud monsters.