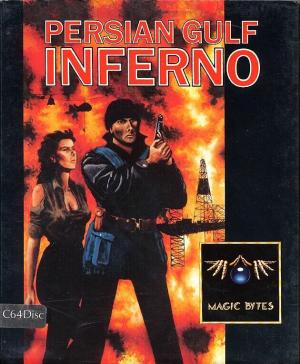 The story is told quick enough: in 1990, terrorists capture the world's largest oil reserve and threaten to blow up an atomic bomb if their demands are not met. You are (as always) the only hope of mankind and so on. Persian Gulf Inferno is a side scrolling action/shooting game. You control your character, who is at first equipped with a handgun and two explosives, around the oil rig, shooting terrorists left & right and trying to disarm the bomb before it goes boom. You can of course aquire more weapons like the SPA-S semi shotgun and machine guns.