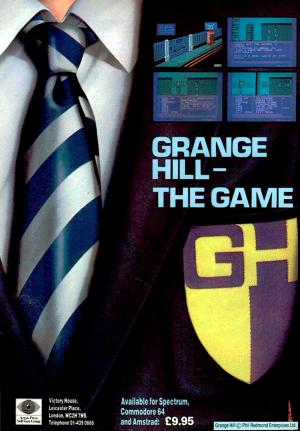 Grange Hill is a 1987 video game from Bug-Byte for the Commodore 64, ZX Spectrum,[2] and Amstrad CPC.[3] It is based on Grange Hill, a popular children's television show. The music was done by David Whittaker,[1] but did not include the TV show's theme tune. The Commodore 64 version was coded by Michael Delves The game's protagonist is Luke "Gonch" Gardener, with Paul "Hollo" Holloway as an assistant (see the list of pupils in Grange Hill). The object of the game is to retrieve Gonch's personal stereo from the school after hours, which his teacher confiscated. Grange Hill is probably most famous for its Anti-Drug message and what is often considered[by whom?] one of the darkest game overs ever, when you walk into a particular screen: