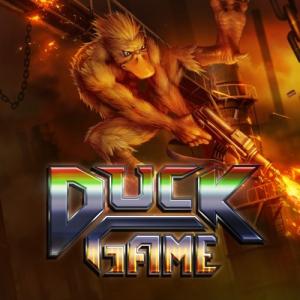 It's DUCK GAME! Enter the futuristic year of 1984 and challenge your friends to a frantic battle for glory. Win over the crowd and gain a following while you battle using Shotguns, Net Guns, Mind Control Rays, Saxaphones, Magnet Guns, and pretty much anything else a Duck could use as a weapon. One hit, and your duck is feathers. So Don't blink. - 2 to 4 PLAYERS in Local Multiplayer Couch Combat - New Single Player challenge mode - Easy to pick up, emphasizing strategy over twitch reaction - 50+ Levels, 50+ Weapons - Level Editor Enter the universe of DUCK GAME. The year is 1984 - and ducks have covered the known world with brutalist office spaces, factories, and construction projects. Fueled by a colossal military- and defense-weapons industry, the ruling government of Duck World recently installed instant-access weapon portals within every office space and simulated forest environment in the spirit of convenient self defense. Four ducks are sick of working. Now it's time to play!