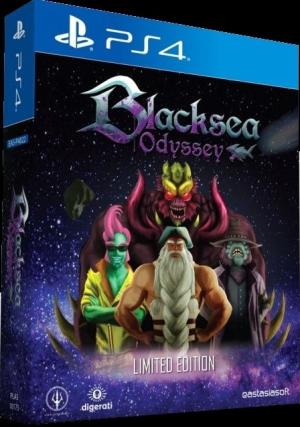 The hunt is on! Get ready to battle colossal space monsters in Blacksea Odyssey, a savage, top-down rogue-lite shoot ‘em up RPG. The greatest huntsmen in the universe have gathered for the Blacksea Odyssey – a legendary tournament that plunges competitors deep into the cosmic abyss on a deadly hunt for the most fearsome creatures that dwell within the void. Key features Brutal dismemberment: eviscerate deadly beasts by ripping them apart with your harpoon Massive bosses: take down true behemoths so colossal they span multiple screens Destructible everything: blast through space-scape environments with your ship, spear or harpoon Action-packed combat: reminiscent of classic top-down shooters mixed with modern RPG and rogue-like mechanics Expansive customization: forge millions of runic modifications for your spear and ship Hardcore rogue-like elements: perma-death, procedural levels, and incredible replayability Trophy Hunters: features a full set of Trophies, including a Platinum