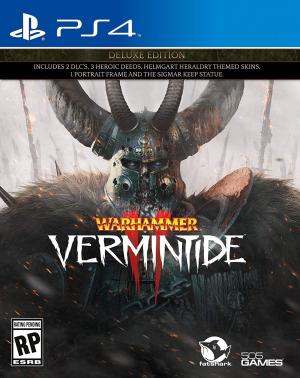 Warhammer: Vermintide 2 is a 4-player co-op action game set in the Warhammer Fantasy Battles world. Sequel to the critically acclaimed Vermintide, Vermintide 2 is the latest installment in a franchise best known for its intense and bloody first-person melee combat. Our five heroes have returned to take on an even greater threat than before – the combined forces of a ruinous Chaos army and the swarming Skaven horde. The only thing standing between utter defeat and victory is you and your allies. If you fall - so too will the Empire. Fight through endless hordes of enemies together with up to 3 friends in this visceral co-op action experience Choose between 5 different characters, each with 3 branching careers to master Evolve your skill and climb the difficulty ladders, from Recruit, Veteran, Champion to Legend Customize your own unique style of play with 15 different talent trees and 50+ Weapon Types Explore the war-ravaged lands of a dying world with a wide range of stunning levels to experience