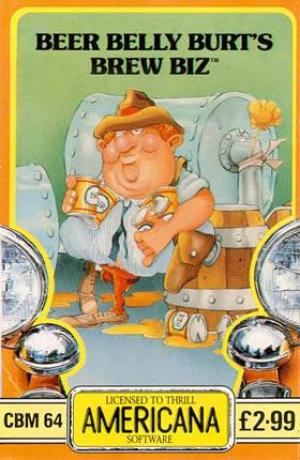 Something strange is happening down at the beer factory...the place has become overrun with nasty zombies, so little else remains but to call for the professional beer belly slob, Burt. In this platform adventure from Americana, you play Beer Belly Burt whose sole aim in life is to drink as much beer as possible. This partly explains his peculiar style of walking which is, to say the least, distinctly wobbly. Beer Belly's factory consists of three departments: Shipping, Production and Control, and each can be accessed from outside. Inside there is a total of thirty two rooms, all constructed in layers of platforms on which Beer Belly happily bounces. However, life for a Beer Belly is not all quaffing and bouncing, lordy me, no - the whole factory has become infested with green Zombies, the worst kind! Springing out from doors they wander around firing the odd bullet at him. But never fear - Beer Belly is equipped with his own weapon to ensure the destruction of these nasty creatures. Of course if you're not the kind of person who goes around shooting every thing in sight, then Beer Belly can perform quite a nifty jump to avoid the Zombies and their fire power. In addition to jumping, Beer Belly can also avoid them by being transported from one platform to another by the powerful air vents, which occasionally blast out air, launching him up onto the next platform. But beware of booby trapped air vents which spout fire, as they leave Beer Belly burnt to a crisp. To help him make his way through the factory there are exit signs which indicate the best route to access another screen. However, failure to leave by the correct route sees Beer Belly falling from the screen and ending up in crumpled lump - with a hangover no doubt. On some screens Beer Belly needs to unlock doors to gain entry to another, and for this he needs a key which is usually placed in some inconvenient position. Luckily, only one Zombie appears on the screen at any one time, so if you do happen to see any more, don't worry - it's probably only the effect of the beer!