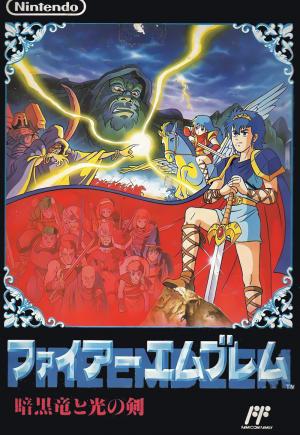 Long ago, the continent of Archanea was invaded by the Dolhr Empire, led by the Shadow Dragon Medeus. Anri, a youth from Altea, defeated the Shadow Dragon using the divine sword Falchion. The Kingdom of Archanea was restored and the world entered an era of peace. However, 100 years later, Medeus is resurrected by the evil wizard Gharnef, who has conquered the mage-state of Khadein. The two form an alliance with the kingdoms of Macedon and Grust in order to conquer the world. Cornelius, the king of Altea and successor of Anri, takes up Falchion and leaves to battle them, leaving his son Marth and daughter Elice in the care of a bastion manned by Altea's ally, Gra. However, Gra betrays Altea to Dolhr; Cornelius is killed, Falchion is stolen, and Elice sacrifices herself so Marth can escape. Accompanied by a handful of knights, he takes refuge in the island nation of Talys. Several years later, Marth repels a pirate invasion of Talys, leading its king to conclude that he is ready to battle Dolhr; he sends Marth out with several of his most trusted men and his daughter, Princess Caeda. Marth first rescues the kingdom of Aurelis and enlists the aid of its king's younger brother, Duke Hardin and his retainers. He meets Princess Nyna, the last survivor of the Archanean royal family and leader of the resistance against Dohlr. She gives him the Fire Emblem, a legendary treasure given to the hero destined to save the world. The two march to Archanea and free it from Grust's grasp. After briefly invading Khadein in search of Falchion, Marth retakes Altea. He learns that his mother was killed in the invasion and that Gharnef is holding Elice prisoner. Marth next battles Grust and their top general, Camus, who rescued Nyna from execution at Dohlrian hands; he chooses to uphold his honor as a knight of Grust, and Marth is forced to defeat him. Marth is contacted by Gotoh, a wise old sage, who informs him that Gharnef wields the tome Imhullu, making him invincible; the only thing capable of defeating him is the magic of Starlight. Gotoh sends Marth to the Fane of Raman to find the materials needed to create Starlight; he also rescues the divine dragon, Tiki. Marth then invades Macedon and deposes the tyrannical King Michalis with the aid of Michalis' sister Minerva. There, Gotoh reforges Starlight. Marth invades Khadein once more, defeats Gharnef, reclaims Falchion, and rescues Elice. He then makes his way to Dohlr, battles, and defeats Medeus, returning peace to the land. If Caeda has survived the events of the game, she and Marth declare their love for one another.