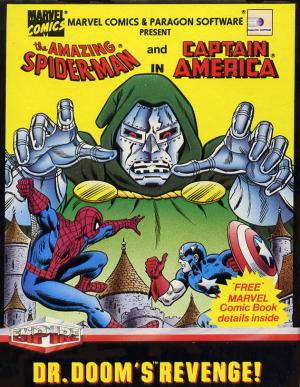 The Amazing Spider-Man and Captain America in Dr. Doom's Revenge!

Latverian president Dr. Doom is a terrible enemy, so when he hatches a plan to blow up New York City with a stolen Atomic bomb, one Marvel superhero is not enough to stop him. As the lavishly-drawn comic bundled with the game explains, Spider-Man and Captain America must join forces to go to Latveria and foil his plans. The main action in the game is a side-scrolling beat 'em up, in which you alternately control the two characters. They each have their own moves to deal with The Rhino, Electro and other foes. Moves are context-sensitive based on the distance between your character and the opponent. Energy bars decrease as you each take hits. After each section you get comic-book sequences as a reward, and to set the scene of the evolving story. Descripton borrowed from: http://www.mobygames.com/game/c64/amazing-spider-man-and-captain-america-in-dr-dooms-revenge