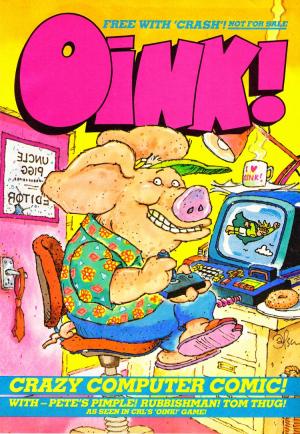 Oink! is based on the British comic magazine of the same name. The chief editor, Uncle Pigg, has a problem: He is missing many pages for the next issue and the editorial deadline is near. The player needs to play three mini games and, depending on the performance, more or less pages are filled. Said comic pages can be read after finishing the mini games.•Pete's Pimble is based on Breakout: the player controls a paddle to prevent a bouncing ball to leave the playfield from the side the paddle is installed. The playfield is full of blocks which are destroyed when the ball touches them - the goal is to get all of those. Enemies can be destroyed by shooting a laser cannon. •In Rubbishman the player controls a super hero of the same name. He flies through obstacle courses and the player needs to steer the flying height to avoid said obstacles. He can also shoot the blocks to destroy them in time. This section has 12 levels. •Tom Thug, another superhero, has to be guided through a top-down maze to the exit. To do so he has to find and pick up special blocks which either reward advantages like extra lives or keys which are needed to proceed further. Enemies can either be stunned or destroyed with his gun.