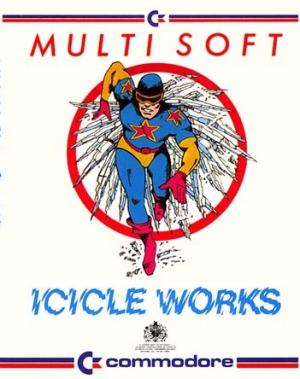 Christmas is getting close and Santa has a big problem. After returning from holiday he finds all his presents scattered and buried under snow. Things doesn't get any easier with the possible avalanches and all the bad tempered penguins and polar bears that run around and disturb him. It's the player's job to help Santa and retrieve all the presents before Christmas Day. Icicle Works is a Boulder Dash variant. The player's objective for each level is to retrieve a number of parcels that are needed to construct a toy. The game is timed and the player loses a life if he doesn't complete a level fast enough. To reach the parcels he has to dig paths through the snow, something that is automatically done when moving through it. The player has to watch out for enemies and different hazards, not least the snow balls that fall into the passages when the player digs next to them. The player then has to move quick to avoid being crushed beneath them. There are also different animals that patrol the passages, like bears and penguin. Some levels has under ground springs that can trap the player if the water is released. Once all parcels has been collected the player can move on to the next level through a door. A level can be revisited and then all the parcels will appear as bonus points.