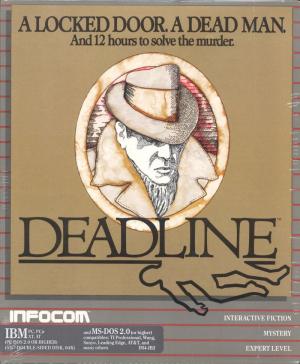 Deadline is an interactive fiction computer game published by Infocom in 1982. Written by Marc Blank, it was one of the first murder mystery interactive fiction games. Like most Infocom titles, Deadline was created using ZIL, which allowed the easy porting of the game to popular computer platforms of the time such as the Apple II and the Commodore 64. It is Infocom's third game. You have 12 hours to solve the murder of Mr. Marshall Robner. If it was a murder... Mr Robner was found locked in his library, dead -- from a lethal dosage of anti-depressants. Friends and family are calling this a suicide of depressed wealthy industrialist. As Chief of Detectives, you find something just doesn't smell right about this case. You go out on a quest to find a suspect, his motive, method, and opportunity.