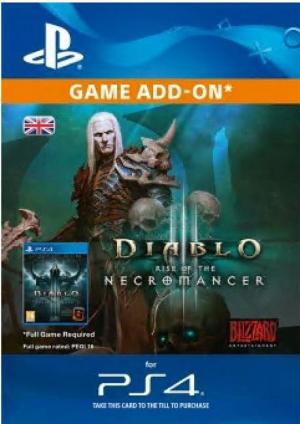 Diablo III: Rise of the Necromancer

Return to the mortal realms with deadly new powers of blood, bone and essence. The Rise of the Necromancer Pack unearths a trove of new Diablo III content, including: - New Hero Class - Necromancer: Command legions of risen dead and wield the dark arts as the male and female Necromancer - +2 Character Slots: Support your growing roster of battle-hardened heroes. - +2 Stash Tabs: Expand your formidable collection of weapons, armor and gear across all heroes. - Wings of Crypt Guardian: Unfurl wings of deathly energies with any hero in your roster. - Half-Formed Golem Pet: Summon a Half-Formed Golem pet on the battlefield to fetch gold from your fallen enemies. - Banner Shape, Banner Sigil, and Pennant: Bear the heraldry of the Necromancer as you battle throughout the mortal realms.