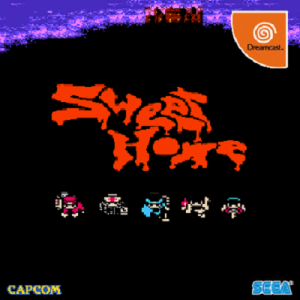 Sweet Home is a survival horror role-playing video game that was released for the Famicom in 1989. It features several elements of role-playing video games. Sweet Home was developed and published by Capcom and the game was never released outside Japan. The game is related to the Japanese horror film of the same name. What many call the grandfather of modern horror survival games, sweet home is a fine example of how details can make a simple game perfect. With a simple combat system, the game leads you to manage multiple teams and limited supplies of items in order to survive and espace the mansion. And beware, death is taken very seriously here! You die, you die, no going around it. So...do you have what it takes to discover the horrible secrets behind the paranormal activity and escape the mansion? ## about the release ## Sweet home is, originally, a japanese game, never released outside of japan. What i present in this release is a trustworthy fan-translation to a great game that represents the very good start of the giant Capcom. The release uses a modified version of nesterDC 7.1, which runs other nes roms if a cd is inserted.