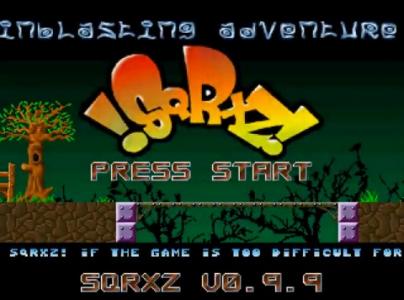 While Sqrxz wandered around on a sunny day, he was unaware that he had lost all his items while enjoying the scenery. It was already dark until he recognized the loss. There was no possibilty, but to go back where he started the trip and save his things. If the loss was not already enough, strange creatures appeared. Will they be helpful? Sqrxz requires fast reflexes and is a simply mindblasting Jump’n’Run puzzle game with high frustration factor originally made in 1996 by Marcus Vesterlund (Maze) and John Holmvall (Hojo) for DOS and Windows 9x. Sqrxz (2010) is a remake of a game with the same name and has been created by Rodolphe Boixel (Thor), Shahzad Sahaib (Kojote), Simon Butler and Brendan Ratliff (Syphus). Minor support came from Marcus Vesterlund himself who also gave permission to redo his game. Denny Müller (Mulle) supported the team with a WordPress-Theme for the official page and Rabia Sahaib (Mahek) made three more levels.