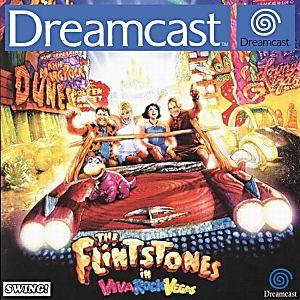 The Flintstones in Viva Rock Vegas

The Flintstones in Viva Rock Vegas is an unreleased Dreamcast racing game, developed by Full Fat and set to be published by Swing! Entertainment. It is based on the 2000 film of the same name, itself based on Hanna-Barbera's The Flintstones franchise. This Dreamcast adaptation was a kart racer, similar to others at the time, featuring various characters and environments from the movie. A notable thing is that, while based on a live-action movie, the game's look is more in line with that of the original Flintstones cartoons, as well as powerups being obtained through knocking bowling pins, also a nod towards the show. While this Dreamcast version was cancelled, a sample version, likely intended for the press, has since surfaced. Had it been released, it likely would've come out in late 2000, or early 2001. While it is not known if the game was meant to see release outside of Europe, the presence of Conspiracy Entertainment in the opening logos means it's likely that they would've been the North American publishers.