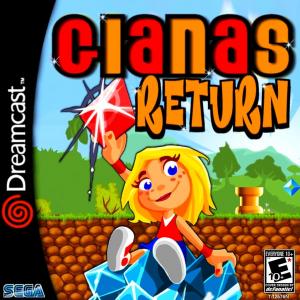 Evil Swampy and his followers have stolen the magic ruby, which made it once possible for Giana and Maria to return from their dream. Many creatures are after this ruby, but does it really has power, or was it just a coincidence?As this is not bad enough, Swampy fell in love at first sight with Giana’s sister Maria and shamelessly kidnapped her. She simply has been at the wrong place at the wrong time.You will now have to take on the role of Giana and get back the magic ruby. And most important of all, save your beloved sister Maria and get home save! Good Luck! Giana’s Return aims to be a worthy UNOFFICIAL sequel of “The Great Giana Sisters”. There is an official sequel for Nintendo DS named “Giana Sisters DS” ( https://www.giana-sisters.com/ ) and also has slightly more levels than Giana’s Return. In other words, it’s worth the money :) “The Great Giana Sisters” is an alltime classic made in the late eighties mainly by Armin Gessert, Manfred Trenz and Chris Hülsbeck.