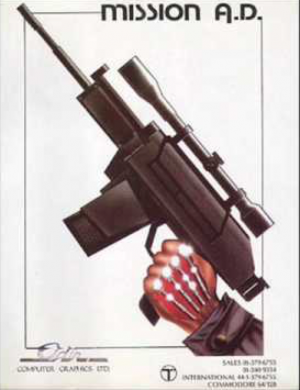 Earth is in trouble once again after minor attacks against our planet and scientists have predicted that there will be one final big attack that will totally destroy us. The scientists have devised a plan called Mission A.D. which will see all countries join their defence systems and give financial aid to the plan. All countries agreed apart from one, Silesia, which sees it's Head of State General Offisrokka condemn the plan as he feels it's a capitalist plan to take over his country. Assassins hired by the General have now been dispatched to the bunker where the plans are being devised and drawn up to kill the scientists. You play the role of super assassin Rik O'Shey who has been sent to the bunker to take out all the assassins in this side view flick-screen shooter over various missions within a time limit. The bunker itself is made up of eight areas connected by transporters and each screen in the areas is made up of two levels which are connected by elevators to move from the top and bottom floor. You are armed with a gun and you must search each area for a set number of assassins which you are told before you start each mission.