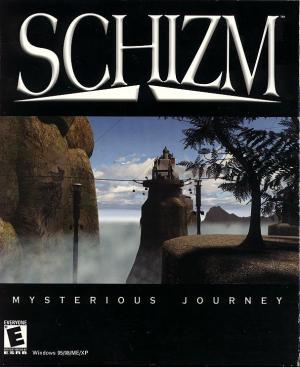 Schizm: Mysterious Journey is an adventure-genre computer game created by Detalion and LK Avalon and published by DreamCatcher Games. It was authored by acclaimed Australian science fiction writer Terry Dowling. The game's environment is rendered very realistically and in exceptionally high detail. The background sounds are realistic and dynamic (for example, footsteps change as a character walks over different surfaces such as metal and stone, and echo when inside tunnels). The background music is very atmospheric and highly evocative. A major distinguishing feature of Schizm is that the player can switch control between the two characters at any time. There are puzzles which require both characters to be performing actions at the same time before they can be solved. The game is available on 5 CDs or as a single DVD. The CD version does not include all the puzzles that appear in the DVD release and was also missing some of the background story. A sequel, Mysterious Journey II (also known as Schizm II: Chameleon), was released. It was also authored by Terry Dowling.