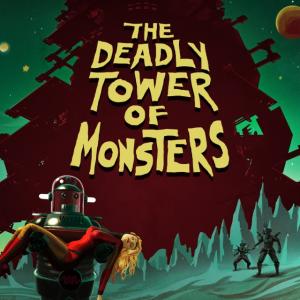 The Deadly Tower of Monsters

The illustrious space explorer Dick Starspeed has crash landed onto the mysterious planet Gravoria. With his rocket ship out of commission and his trusty companion Robot nowhere to be found, he sets out to explore this new world and its hostile inhabitants. In the midst of a battle between the good and evil factions of ape men, he meets the stunning Scarlet Nova, heir to the planet's tyrannical Emperor. Unwilling to follow her evil birthright, Scarlet tells Dick of the Emperor's atrocities... and never one to turn down a fight - or to turn down a beautiful blonde - Dick agrees to help overthrow her father's cruel regime! After a chance reunion with the resourceful Robot, our heroic trio embark on a fool's errand to topple Gravoria's greatest menace and restore peace to the planet once more. However, in order to accomplish this feat, they will have to ascend... THE DEADLY TOWER OF MONSTERS!