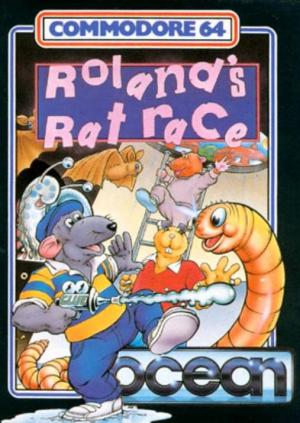 Roland Rat, star of British breakfast TV in the 80s, is late for work and his car won't start so you must control Roland and guide him through the sewers of London within a time limit or face getting the sack. To make problems worse, his friends have been kidnapped and must be rescued. The game is a flick-screen platform game with various levels of platforms on each screen connected by ladders and stairs. On the edge of each screen are various exits as well as some exits which go into the screen. Roland must collect pieces of a door and a key to open a large door at the end of the sewer which contains the Inner Sanctum containing his friends. Roaming the sewers are wellington boots and if they touch Roland then he loses part of an energy bar and when it reaches zero then it is game over. Various food stuffs can be collected to increase the bar. As well as avoiding the boots, Roland can fire a glue gun which holds the boots for a short space of time but be careful as Roland can also get stuck. Each use decreases a bar but two glue packs can be found to top the bar up. On the bottom level on each screen, a train occasionally appears and can be caught with the glue gun, and when boarded can take Roland the length of the sewer.