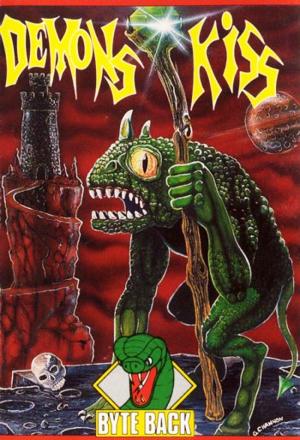 Demons Kiss is a side view flick-screen game where you control a warrior exploring a castle to rescue a beautiful maiden called Alicia from a Demon Harpy. You are armed with a magic ball which can be used to hit various creatures and demons, as well as your hands and feet to kick and punch. You have an energy bar which decreases when you are hit and when it is empty then you lose one of three lives. The castle itself is made up of numerous rooms and ladders can be climbed up or down to reach new parts of the castle. Occasionally you will come a cross a demon blocking a route and you must fight them to kill them to move onwards. The demon also has an energy bar which you need to empty to kill him. A part of the castle is a maze with many identical looking rooms that needs to be navigated in your quest to rescue Alicia.