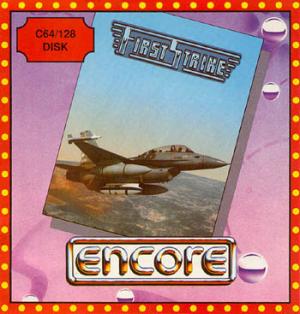 First Strike by Elite Systems is a very good conversion of the Afterburner idea for the C64 from 1989. You control a fight jet, which is armed to the teeth, in 8 missions, which take place at different operation areas scattered all over the world: training missions in the Gulf of Mexico, Mediterranean mission, Gulf mission, Arctic mission, Black Sea mission, Far East mission, East Russia mission, Central Europe mission. You can choose your weapons before a mission and at a stopover during the mission. Corresponding to the operation area the design of the landscape changes and you can even see cloud cover and fly over or under it..