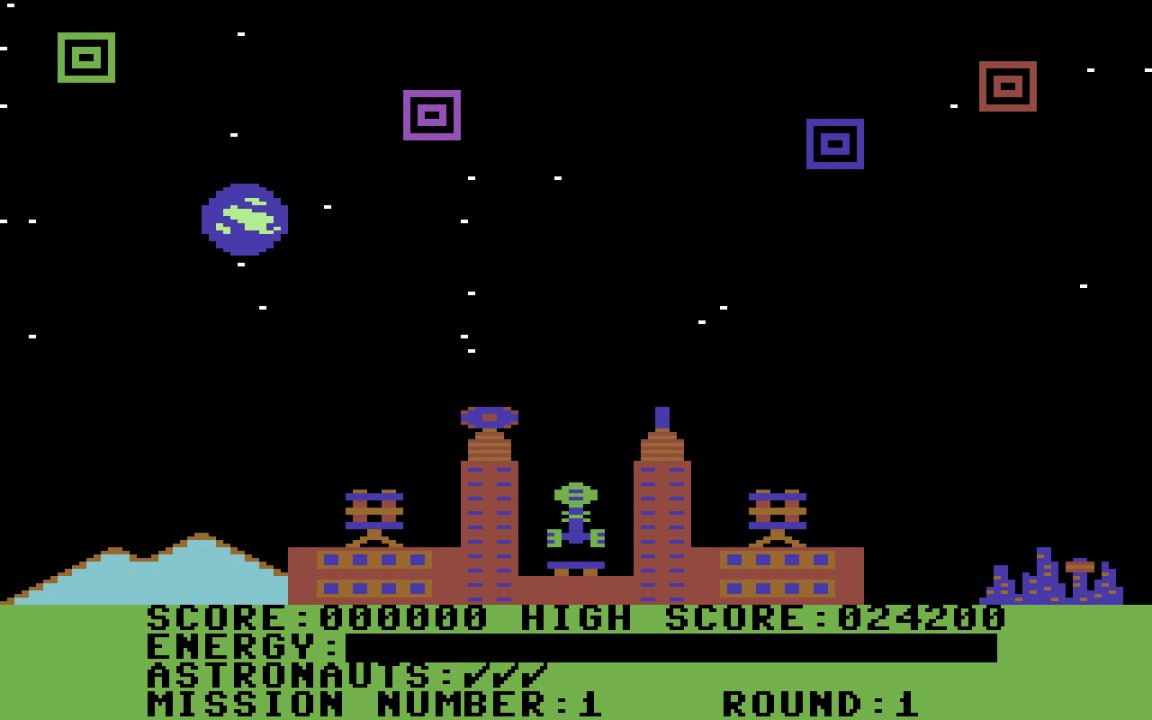 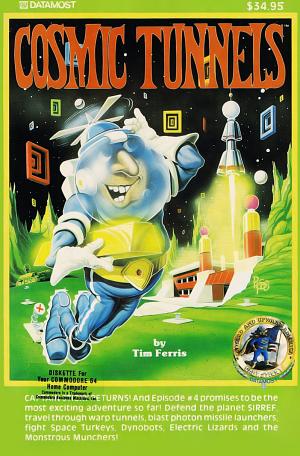 You are the principle defender of the planet Sirref, the only habitable planet in the Relffok Galaxy, which is part of the Nodrog universe, and you have a major problem, the energy supplies are running dangerously low. The Jebs have forced a energy embargo on your planet and won't supply the Power Generating Complex situated on the moon which supplies all the energy for the planet from their power plants located on four asteroids. You have decided that your mission will be to get the energy bars needed from the asteroids, but the only way to get there is through four Cosmic Tunnels and if you are successful then you have to land on each asteroids and collect all the bars that they have before returning back to your base.. Cosmic Tunnels is a single screen game split into various parts with each asteroid being played over three parts and all must be completed for your mission to be successful. The first screen is viewed from the side where you control your space craft from the bottom of the screen and you must guide it upwards into one of the four Cosmic Tunnels while avoiding falling meteors. You can move the ship left, right and upwards but gravity will try to pull you downwards and you won't stop straight away when you move in a direction. Hitting the meteor or your base loses you part of an energy bar, moving your craft also loses you energy and when this empties then it is game over. Once you reach the entrance to a tunnel the game switches to a 3rd person view as you fly into the screen down the tunnel shooting or avoiding the space mines coming towards you for 25 seconds to complete the tunnel. You now appear on a side view screen where you have to land on landing pad while avoiding the missiles fired from the defence systems. Once again inertia and gravity play a part as you move your ship around the screen. You are able to bomb the defence systems but bombing loses you energy. Once you land you now see a side view screen viewed from an elevated angle and you appear from your rocket at the top of the screen. There are four energy bars at the bottom of the screen and you must collect them one at a time and take them to your ship. There are creatures running around the screen and these must be avoided or you lose one of three astronauts. You can speed up to run but this is limited and there are also pads that can be stood on which either springs you in the air or gives you a jetcoptor to fly on for a short time. Once all the bars are collected you then have to get back to base and you repeat the other screens but in reverse order. Once you reach your base you are given bonus points for energy and astronauts left before you are replenished and you attempt the next Cosmic Tunnel. 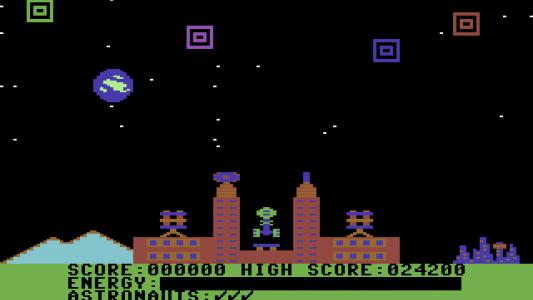