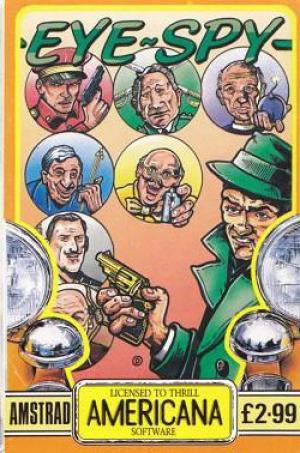 The main character is a bug eyed being (surely the most unlikely looking detective) who is given the task of finding which of seven men is a murderer. To find the guilty man he first has to gather eight clues from a complex of rooms. These are joined by corridors and shafts which Eye Spy navigates in a shuffling walk or by jumping over steps and obstacles. The rooms take the form of platform screens which ES has to get around to collect the safes that hold clues. Not all the safes contain a clue and the ones that do change for each game, so most of them will usually have to be visited. Guarding the safes are various monsters in each room which sap ES's energy when they touch him. They move in patterns and can therefore be avoided with a little practice. However one room allows you to replenish energy and the time limit that runs down. There are also a couple of instantly-deadly rooms from which there is no escape if you get caught by fire or water. When all the clues are obtained you can get a riddle, the answer to which reveals the murderer's identity, leaving you to return to the courtroom to complete the game.