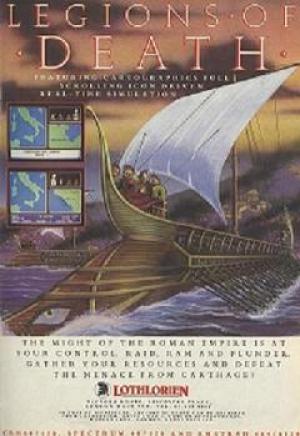 Legions of Death is a menu-driven strategy game set during the Punic Wars, fought between the Roman Republic and Carthage (264 to 146 BCE). What stands out is that it focuses on naval warfare. While Greeks built their ships for ramming attack, Romans - lacking experience in sailing - developed new boarding tactics to exploit their strong infantry. Contrary to game advertisement the single player mode only allows you to play as Carthaginians, Roman side is available only in two player mode. First design your ships (from a modest bireme up to impressive septireme, add boarding ramps, towers, sails), crew them (slaves, archers, marines) and finally deploy the galleys on a top-down map of the central Mediterranean. In turns, maneuver your vessels, conquer the coastal cities to collect tax and repair your ships, then return the gold to your capital. The first side to meet victory conditions (treasury size, cities held, ships sunk) is the winner.