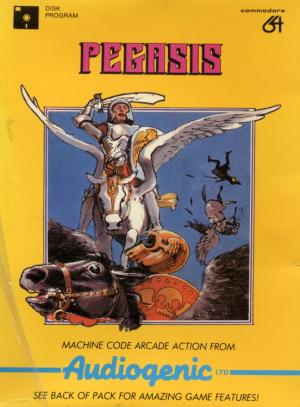 Although there are over three pages of introduction text, the actual game of Pegasis is a fairly simple Joust clone. You play the hero riding a winged horse who must defeat other flying opponents by hitting them from above. In order to get airborne you must continually flap your wings. Timing your flaps allows you to ascend or descend and position yourself above your enemies. Once you have knocked your opponents off their mounts they will land on the bottom of the screen. Hitting the dismounted men increases your score and causes new flying opponents to appear. In addition to single player mode, two players can compete at the same time.