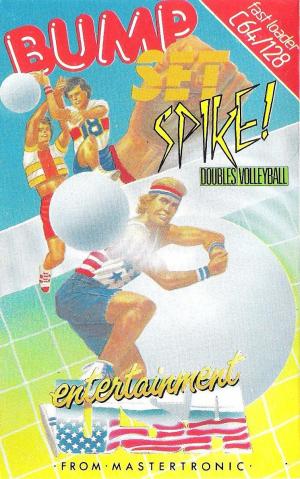 Bump, Set, Spike! Doubles Volleyball is a volleyball game for one or two players that features both indoor and beach courts. The player can choose to play alone against the computer, against another player or cooperate with another player against the computer. All modes involve two players per team and when not cooperating with a friend the player controls both players. When the ball is in play, a small x indicates where it will land and the player has to position himself with his arms aligned to it and then hold down the fire button to set the hardness of the hit. First hit is a bump, second is a set and third is a spike. To succeed with a spike the player has to be at the x spot and release the fire button just when the ball is about to land. While the ball is on the opposite side of the court the active player can be changed. The game can be played in nine difficulty levels divided into three sections: slow, medium and fast. Within each section are different rules for net fouls, ranging from being allowed to being penalised.