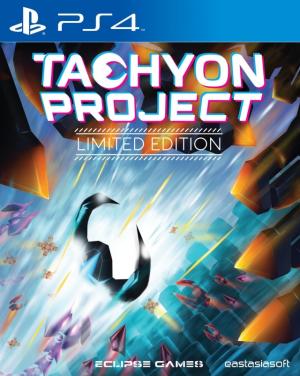 In Tachyon Project you take control of Ada, a software program that has taken conscience and that was designed to hack into the most secure servers on Earth. After some rather misterious events, Ada is thrown out of the test server where it was living and out into the Internet, but when she tries to go back there she finds she's unable to. She'll then start a journey to uncover the truth behind what happened to her creators, which she considers her parents. In the process she'll find out that things were a bit more complex than she initially thought. Tachyon Project is a dual stick shooter where we've taken concepts from the classic shoot'em up genre and tried to adapt them to the dual stick shooter genre. In Tachyon Project the player will find the gameplay versatility and speed traditional to dual stick shooters but with the variability in weapons and enemies that you usually find in shoot'em ups. The variety of weapons, secondary weapons and perks allow for hundreds of combinations for your ship. That, along with the number of different enemy types provides a lot of gameplay variety that is something quite unique in the genre. Tachyon Project also brings new ideas to the table, presenting a new stealth mode in some levels where you have to pick carefully when to shoot to avoid being discovered too early and keep yourself disguised. The game provides an interesting story mode where you go unlocking new weapons, secondary weapons and perks as you progress and uncover the story behind Ada's creation. But you can also play on challenges that present you with unending hordes of enemies to try for the best score and compete in leaderboards. You can play these challenges either alone or with friends in up to 4 player local multiplayer co-operative games.