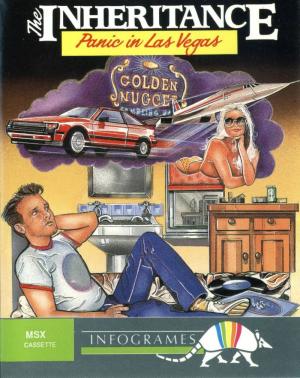 shady character called Peter Stone receives a telegram from a notary telling that his rich aunt passed away in Las Vegas. With the included airplane ticket he must travel to meet the notary and arrange the details of the inheritance. The Inheritance: Panic in Las Vegas is a French adventure game, an early entry in the point-and-click sub-genre. The player moves a cursor in the screen with the ARROW KEYS, and interacts with objects by pressing the SPACE bar. A handbag in the right side serves as the inventory and can be minimized to an icon at the bottom. The game is divided in three loads. At the end of each load, the player receives a password for the next one: ►The first load is entitled "In the building", where the player must leave his apartment and go to the airport. The airplane leaves at 11:20, and this game section starts at 11:10. Besides this time limit, progress is further hindered by the other tenants that appear at each floor. They demand the return of borrowed goods. The player can search other apartments, steal money and threaten the other residents with weapons (this last option can lead to an instantaneous death). ►"At the airport" is the second load, where the player must embark on the airplane to Las Vegas. There is terrorists and other annoyances to be dealt with. ►The final load is called "In Las Vegas", where the player must find the notary, while raising some necessary money (a testament clause says that in order to inherit the money Peter has to raise 1 million dollars by playing games at the casinos).