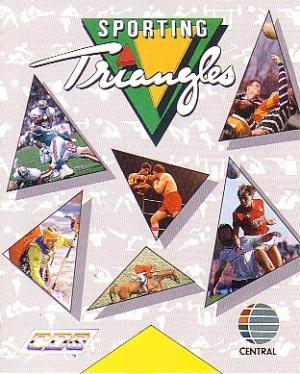 licensed version of a British TV game show from the late 1980s. The game features 3 players, all either human or computer. Each chooses a category of questions out of 12 on offer - some are for a single sport (such as soccer or cricket) while others a more general (such as Indoor Sport and Pot Luck). Four of the seven rounds involve each player being asked a question, which could be from one of the 3 selected categories, or it could be general sport. A die is rolled, and the colour of its final position on the board indicates the type of question. The other 3 rounds include Hit For Six, in which you get a succession of clues and have to work out which of the 6 named people they refer to - get it as quickly as you can to maximize your score. The Jigsaw round involves identifying a club crest, pitch for a particular sport or similar, with a piece added to the picture after each incorrect guess. Again the score declines the more guesses you need. There's an 'on the buzzer' questions round at the end.