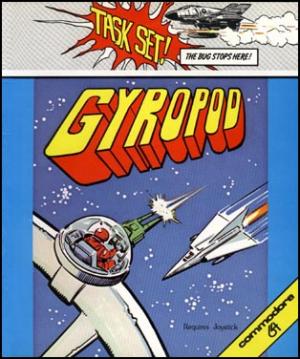 Gyropod is a one or two player shooter for the Commodore 64. The player controls a space ship, the Galaxy Ranger. The ship's mission is to locate and eradicate every planet in an alien system. These planets are defended by waves of fanatical defenders who must be overcome. The ship consists of a supply pod which docks at the start of the level with a Ranger-class Rim. On the rim is a gun and the player rotates the rim, via the up / down keys, to target alien craft and to avoid incoming fire. As the battle progresses, the rim takes damage and holes begin to appear in it. If the gun is either shot or hit by either an incoming space ship it is knocked off the rim and a life is lost. The space battles consume ammunition which is not inexhaustible so the player must plunder each planet before destroying it. A key sequence causes the supply pod to detach from the rim and head towards the planet. This triggers a Lunar Lander- type sequence where the player must successfully land the supply pod on the planet surface. Land too fast and a life is lost. Having made a successful landing a spaceman disembarks and the player directs him to collect boxes that are on the planet surface. The aliens are understandably hostile and will pursue and shoot the spaceman if they can. The game is customizable. Music can be turned on or off, there are three levels of difficulty, and the number of lives available can be set from 1 to 8. The game has a 'hot-seat' two-player mode. Player one goes first and scores as many points as possible with their first life. Then player two takes over until they too lose their first life, after which its back to player one. This continues until both players have used up all their lives.