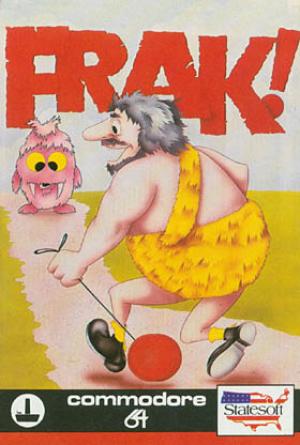 Frak! is a side scrolling platform game in which the player controls a caveman named Trogg. In each level, Trogg's object is to find three keys located on the level. The platforms and ladders (replaced by logs, ropes and chains on later levels) constituting the level are laid out in a very tricky form. When Trogg steps off a platform, he does not fall straight down, but instead slides diagonally downwards. Added to the fact that long falls will kill Trogg, this calls for very skilful jumping among the platforms. Trogg exclaims "Frak!" (presumably an expletive) each time he dies. When the user manages to complete the three levels, they are returned to the first level with the screen display upside down. The game then repeats the same three stage sequence, following which it rotates 90 degrees and repeats again. Subsequent loops consist of video being displayed in black and white and rotated, and also the display being flashed on and off in three second intervals. Enemies in Frak! come in three forms: the large, hairy Scrubbly, pig-like Poglet and large-nosed Hooter (each static, as 'statues'), balloons and daggers. The statues obviously stay still, whereas the balloons fly straight upwards and the daggers fly diagonally downwards. Contact with any enemy will kill Trogg. To combat the enemies, Trogg is armed with a yo-yo that he can launch straight horizontally. The yo-yo will kill any enemy it comes into contact with. Each level also has a time-limit, which can be topped up by the occasionally found light bulbs. However, if the time runs out, the level does not end - instead, the game continues in the dark. After this point, the yo-yo can still be used to remove the static enemies from the level but will not affect balloons and daggers. Frak! encodes high scores as nonsensical secret messages, such as Hairy gonks kiss green Buddhas slowly.