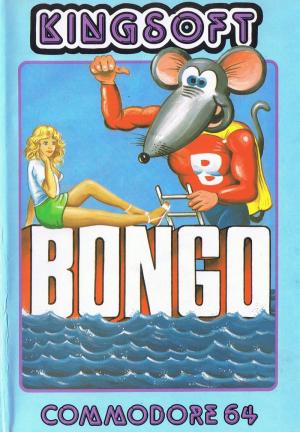 Bongo is a single screen platform game much in a similar vein as Popeye. You control Bongo the rat as he moves about the screen attempting to collect gems while avoiding the bad guy after him. You can teleport Bongo to various parts of the screen by positioning yourself on top of the letters in his name (B O N G O) and pressing the fire button. The screens contain ladders that can be traversed up and down, slides that will slide Bongo to the bottom and conveyor belts that can impede his movement or make him move faster. Only one gem is visible at a time. After five gems have been collected, Bongo rescues his girlfriend and moves on to the next screen. Bonus letters spelling out Bongo can also be collected