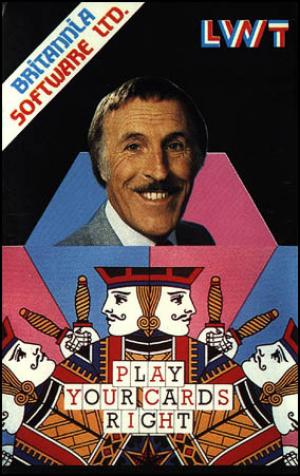 Play Your Cards Right is a computerised version of the British game show first shown in 1980 on ITV and presented by Bruce Forsyth. The TV show had two couples playing against each other but this version is for either one (against the computer) or two players. The game was split into two parts, a question and then playing High/Low with cards. One player is asked a question about how many out of 100 people gave a specific answer, then the other player would say if the actual answer was higher and lower. If the 2nd player was wrong then the other player would then play with the cards first, and vice versa. Each player has five cards with the first card showing a value and the first player would say if the next card was Higher or Lower with Ace as a high card and the same value would mean a loss. The player also could change the first card or freeze their go to answer a new question so that they can change the card on their next go. If the player gets the next card wrong then the next player has a go with their cards. If the player gets it wrong then a question is asked again but if they reach the other end of the cards correctly then they get a point and a new question. Once a player receives two points then they play the final board. The final board has three rows of cards with the bottom row having four with one showing its value, middle row having three and the top row having one. The player has 200 points and they then decide how many points (minimum of 50) to bet on guessing if the next card is Higher or Lower. If they are correct then they get the points back plus the same amount of points. The first card can be changed as well. The player tries to guess the last card with as many points as they can but if they reach zero points during the game then it is game over.